This article is a stub. You can help Gongjin's Campaign Memorials by improving or expanding it.

Cao Cao 曹操 is the father of Wei's first emperor; Cao Pi. A central figure of the Three Kingdoms, Cao Cao laid the foundation for his sons empire and for this was posthumously titled Emperor Wu of Wei. Aside from being a warlord, Cao Cao was also an author of many war journals and was skilled in poetry.

A man from Qiao in Peiguo. Cao Cao was born the son of Cao Song, the adopted son of Cao Teng, The ‘Great Prolonger of Autumn’ Regular Palace Attendant. Cao Cao is a descendant of Cao Can, former Han Chancellor of the State.

When Cao Cao was young, he was clever and ingenious and could adapt himself to any situation. Sometimes, however, he took the law into his own hand, and was casual or frivolous, and he paid little attention to his duties. Few people of that time saw anything remarkable about him, and only the Grand Commandant Qiao Xuan and He Yong of Nanyang thought him unusual. Once, Qiao Xuan said to Cao Cao the following:

"The empire will fall into disorder, and only a man with the ability to command the age will be able to deal with it. You are the man that will restore the peace."

An interesting ruling, that actually eventually saw some sort of truth.

When He Yong saw Cao Cao he sighed and said: "The house of Han is falling, and this is the man who will give peace to the empire."

Qiao Xuan said: "You have made no name for yourself yet. You should get in touch with Xu Zijiang."

Xu Zijiang, given name Xu Shao, was fond of grading people and had an appreciative eye for others' good qualities. Cao Cao went to see Xu Shao and asked him: "What kind of person am I?" At first, Xu Shao refused to give Cao Cao an answer, because he despised the man. Cao Cao pressed again and Xu Shao replied: "You? A good servant in time of peace, a dangerous chieftain in time of trouble." Cao Cao left feeling very pleased.

Yellow Turban Rebellion And After[]

In the eigth month of the year 188 A.D., Cao Cao, who was Gentleman-Consultant at that time, became Colonel Who Arranges the Army.

In 189 A.D. the Regular Palace Attendants' influence in the Imperial Court was planned to be halted by He Jin and Yuan Shao. Cao Cao, however, predicted that their armed means of ending the eunuch influence would surely fail saying:

"There has always been a need for eunuchs, but the rulers of our time should never have granted them such authority and favour as to cause this trouble. To solve the problem, they need only punish the ringleaders; just one jailer would be enough for that. Why such a fuss, calling in soldiers from outside? If he plans to kill them all, the affair will certainly leak out. I can already foresee his failure."

He Jin ended up being beheaded by eunuch ally Qu Mu, but his forces slaughtered the eunuchs and ended up as victorious.

Despite protest, He Jin had summoned Dong Zhuo to aid him in subduing the eunuchs. After the eunuch massacre Dong Zhuo took power in the Imperial Court and set Emperor Xian on the throne, using him as his puppet.

At one point, Dong Zhuo tried to keep several warlords at peace, by giving them ranks and titles. Yuan Shao was promptly appointed as Grand Administrator of Bohai, with enfeoffment as Marquis of Kang District, Yuan Shu was appointed as General of the Rear. Yuan Shu was afraid of Dong Zhuo and fled east, to Nanyang.

Cao Cao was appointed as Colonel of Resolute Cavalry. However, he too fled to the east following a minor road, in disguise and under a false name. At one point he passed through Zhongmou and the local chief became suspicious of him. He arrested Cao Cao and brought him to the prefect. Fortunately a local recognised him and pleaded on his behalf, as a result o this, Cao Cao was released. When Cao Cao reached Chenliu, he sold all his family property and with the money he enlisted righteous troops, preparing to campaign against Dong Zhuo. This was in the twelfth month at Yiwu.

In the first month of the year 190 A.D., a coalition was formed to oppose Dong Zhuo. This coalition was named the Guandong Coalition and Yuan Shao was appointed as its leader. The members of the coalition spread themselves over several locations east of the passages. Cao Cao, along with Liu Dai, Bao Xin, Yuan Yi, Zhang Miao, Zhang Chao and Qiao Mao, was sent to camp at Suanzao, a location at the south bank of the Yellow River and directly east of the capital.[1]

The Battle of Xingyang[]

When Dong Zhuo heard of the coalition, in the second month, he coerced the Son of Heaven to transfer the capital to Chang’an. He himself remained in Luoyang and razed the palaces and offices of state. At that time Yuan Shao garrisoned Henei; Zhang Miao, Liu Dai, Qiao Mao and Yuan Yi garrisoned Suanzao; Yuan Shu garrisoned Nanyang; Kong Zhou garrisoned Yingchuan and Han Fu was at Ye. Dong Zhuo’s troops were strong, so Yuan Shao and the others dared not approach.[2]

"You have raised loyal troops to destroy oppression and disorder, and a great army is already collected. Why do you hesitate?

At the beginning, if Dong Zhuo had relied on the imperial house, occupied the old capital [Luoyang] and turned east to take the offensive against the rest of the empire, then even though he was acting as a criminal it would still have made things difficult. But now he is burning palaces and houses, and he has kidnapped the Son of Heaven and sent him away. All within the seas is in disorder and no-one knows where to turn. This is the time he is condemned by heaven. One battle and the empire is settled."

Cao Cao then led his army west to occupy Chenggao. Zhang Miao send his general Wei Zi with a division to aid Cao Cao. They advanced to the Bian River at Rongyang where they met Dong Zhuo's officer Xu Rong at Xuantu. Cao Cao's force was badly defeated and Cao Cao himself was struck by an arrow. His horse was wounded under him. Cao Cao's cousin Cao Hong than offered his own horse to Cao Cao, who first refused to accept, but when Cao Hong said: "The empire can do without me, but it cannot do without you.", Cao Cao accepted the horse and Cao Hong followed him on foot. Seeing that Suanzao would be hard to take, Xu Rong withdrew. 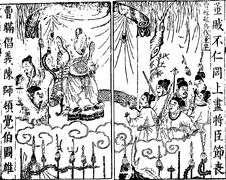 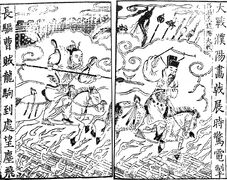 This article is a stub. You can help Gongjin's Campaign Memorials by improving or expanding it.