Lady Qiao, along with her younger sister, were born in Lujiang commandery 廬江 in Yang Province 扬州. As Lady Qiao grew into adulthood, she became an attractive woman and she would eventually be remembered as one of the greater beauties of ancient China.

During Sun Ce's conquest of Wu territory, at Wan, she met the Little Conqueror. Sun Ce kept the Lady Qiao for himself and gave her younger sister to his close friend Zhou Yu 周瑜. Later, Lady Qiao and Sun Ce married. In the year 200 A.D. she gave birth to their child Sun Shao 孫紹. In that same year, Sun Ce died after being seriously wounded by retainers of Xu Gong 許貢. What happened to the Lady Qiao after Sun Ce's death is not known.[2] 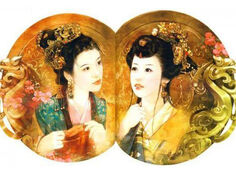