Lady Sun 孫妃, in fiction known as Sun Shangxiang 孫尚香, was the daughter of Sun Jian 孫堅 and Lady Wu 吳妃 and younger sister of Sun Ce 孫策 and Sun Quan 孫權. She was part of a marriage pact with Liu Bei, but later fled back to Wu.

Lady Sun was the sister of Wu's first emperor, Sun Quan, and the only recorded daughter of Sun Jian and Lady Wu. Although history records no given name for Lady Sun (or her sisters) she is, in legends, commonly referred to by the name Sun Shang Xiang. She was a woman of strong personality as shown in events throughout her life. Fa Zheng’s biography in Records of Three Kingdoms compares her courage and energy to that of her brothers.

In 209 A.D., she was given to Liu Bei in marriage as part of an alliance between Sun Quan and Liu Bei. At the time Lady Sun was a little over twenty years old and a woman of pleasant appearance and unique character, but as a result of the marriage she took general control over his household along with guardianship over his son and heir apparent, Liu Shan 劉禪. This is because both of Liu Bei’s former wives, Lady Gan 甘 and Lady Mi 糜, had already died of natural causes. Because Lady Sun preferred to be accompanied by more than a hundred female attendants, all of whom were capable of bearing arms, whenever Liu Bei visited her he trembled for his life. They are not recorded as having had any children.

However, two years later in 211 A.D. the Sun-Liu alliance was badly weakened due to disputes over Jing Province. It was at this time, after being contacted by an agent from Wu, that Lady Sun returned to her brother’s court. According to Zhao Yun’s secundairy biography, the Zhao Yun biezhuan 趙雲別傳, Lady Sun attempted to take Liu Shan with her but was stopped by Zhao Yun and Zhang Fei 張飛 (who were presumably sent by Zhuge Liang). It was through heavy negotiations that Lady Sun surrendered the young heir to the two generals before she journeyed downriver to the Southlands. It is through this event that the marriage and alliance effectively ended. 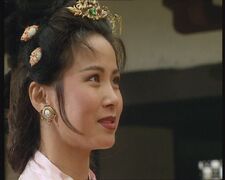