“Formerly I did not know the actual strength of your army, hence I was defeated. Now that you have graciously permitted me to inspect the camps, which are only like this, I am certain to defeat you easily.”
—Meng Huo

Meng Huo 孟獲 was a local leader of barbarians in the south of Yi province. He succeeded the instigator of the Nanman rebellion Yong Kai and led seven battles against the Shu-Han chancellor Zhuge Liang.

Meng Huo's home of record was Zhuti commandery in Yi province. He was respected by both the Chinese and the southern barbarians[2] (nánmán 南蠻) and because of this the local leader Yong Kai 雍闓 in Yongchang commandery called upon him to entice and incite the various barbarian tribes. Earlier Yong Kai had seized Zhang Yi, a Grand Administrator of Yizhou commandery for Shu-Han, because Yong Kai did not acknowledge Shu-Han's sovereignty. He also attempted to enter Yongchang commandery after being appointed by Sun Quan as Yongchang’s Grand Administrator, but he was met with resistance from Lü Kai and Wang Kang.[3]

When Meng Huo went to tempt various tribes, Zhu Bao 朱褒, the Grand Administrator of Zangke commandery and Gaoding 高定, a King of Barbarians in Yuexi commandery both responded to him.[3]

For some time Zhuge Liang 諸葛亮 of Shu-Han was aware of the troubles in the south. In 225 AD he headed to Nanzhong to pacify the region.

The three leaders Yong Kai, Gaoding and Zhu Bao had come up with a plan that should’ve drawn Zhuge Liang deep into the terrain of Yong Kai and Meng Huo. Once this was done, Gaoding would attack Zhuge Liang from the west, thereby encircling Zhuge Liang. The plan was ultimately not set in motion, because subordinates of Gaoding had murdered Yong Kai. Later Zhuge Liang then defeated Gaoding and executed him.[2]

After Yong Kai's death Meng Huo collected the remainder of his troops.

Meng Huo would go on to challenge Zhuge Liang a total of seven times. Everytime he would be defeated and captured, and after every capture he would be released.

Zhuge Liang was determined to capture Meng Huo alive, because of his ties with the Nanman. Having caught Meng Huo, he made him inspect his camps and asked:

“Formerly I did not know the actual strength of your army, hence I was defeated. Now that you have graciously permitted me to inspect the camps, which are only like this, I am certain to defeat you easily.”[2]

Zhuge Liang laughingly released him. After the seventh capture and release Meng Huo stayed and would not go, saying:

“Your Excellency has heavenly majesty. We southerners will not rebel any more.”[4]

Following Meng Huo's submission to Zhuge Liang, the latter appointed the worthy and competent men in Nanzhong to be officials. Among them were Meng Huo, Meng Yan 孟琰[n 1] and Cuan Xi 爨習.[1] Meng Huo was made Assistant to the Imperial Counsellor (yùshǐ zhōngchéng 御史中丞).[5]

John Herman, in The Kingdoms of Nanzhong, adds that Zhuge Liang was so impressed with Meng Huo's tactical skills that he added him to his personal staff, and within a year Meng Huo was commanding Shu-Han troops battling along the Shu-Han/Wei front in what is now northern Sichuan.[6][n 2]

Pei Songzhi found certain parts of the Han-Jin chunqiu unreliable, such as Wang Ling's biography. He has not expressed doubts about Meng Huo's entry into this work. Meng Huo's entry was thus included in the Records of the Three Kingdoms,[n 3] but without additional commentary.

There were thus two sources in which Meng Huo was mentioned:

Which were later included in:

The Records of the Three Kingdoms and the Zizhi tongjian are two of the most popular Three Kingdoms sources. Yet, despite being included in these work various historians have found reasons to doubt Zhuge Liang's campaign against Meng Huo (especially the 7 captures and releases), but also Meng Huo's existence.

There are various reasons given for doubting Meng Huo's existence of the reliability of Zhuge Liang's campaign as mentioned in Han-Jin chunqiu:

If Meng Huo indeed did not exist, then who was the man Yong Kai called upon to encourage the various barbarian leaders to revolt in Nanzhong? Or did he actually not call upon somebody? And who was it that collected Yong Kai's troops to oppose Zhuge Liang? Or was there nobody opposing Zhuge Liang after Yong Kai and Gaoding died?

According to Zhang Hualan's Discussion on Meng Huo (Mèng Huò biàn 孟獲辯) Meng Huo indeed did not exist. Zhang claims that Meng Huo was invented by later historians to represent the various Nanzhong leaders who opposed Zhuge Liang. He supports this statement by saying that 獲 (Huo) means 'captured'.

It's indeed a coincidence that the name of the man that gets captured seven times literally means 'captured'. But does that mean that he is fictional?

If we answer with “no”, we could support it with the following example:

Just as with Meng Huo, these names indicate quite well what happened. Liu Bei founded a kingdom and did all the preparation to make it possible. Liu Shan would go on to surrender it to Wei. These two men were definately not fictional, so why should Meng Huo be?

On another note, it is not clear if Meng Huo was a Chinese or not. If Meng Huo was not of Chinese origin, then his name could've just sounded like 'Meng Huo' and the Chinese chose a humiliating hanzi to transcribe it with.

The campaign itself remains very dubious. Aside from Zhuge Liang's one victory over Gaoding and seven victories over Meng Huo we are not told much.

In the seventh month (22 August - 19 September)[2] Zhuge Liang is said to have arrived in Nanzhong, “winning victories everywhere” (referring to Yong Kai and Gaoding, who were killed).[2]

If the journey back to Chengdu took as long as the journey from it, then Zhuge Liang pacified Nanzhong in only roughly one month.[n 5] With the lack of detail concerning this campaign it's rather difficult to varify if Zhuge Liang could've done the following in just one month:

A battle can be won in only a matter of hours. For example during the Yellow Turban Rebellion the Han General Huangfu Song was fighting Yellow Turban leader Zhang Liang in Guangzong city and after one initial set-back Huangfu Song regrouped, attacked and defeated Zhang Liang within 24 hours. Personally, I do not think any of Meng Huo's battles against Zhuge Liang took any longer than 24 hours. I think some of them might have taken no less than 12 hours. But that's just my opinion which can't be supported by any historical documents.

Another problem is that we can't determine how long it took Zhuge Liang to travel from Gaoding's location to Meng Huo's, or how far away lay Zhuge Liang's and Meng Huo's camp from each other. All in all we know just too little to determine if the campaign indeed went the way as written in the Records of the Three Kingdoms. 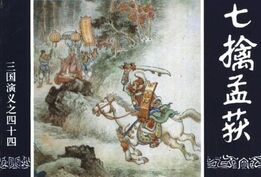