Battle against the Black Mountain Bandits

The Red Hare Horse (Chìtùmǎ 赤兔馬), or Red Hare (Chìtù 赤兔), was a fast steed during the Later Han and Three Kingdoms periods. In the fictitious novel Romance of the Three Kingdoms the horse was given to Lü Bu by Dong Zhuo. When Lü Bu was defeated at Xiapi commandery by Cao Cao, the latter obtained the horse and later gave it to Guan Yu in a failed attempt to bribe him. Guan Yu kept the horse until his death in 220 AD. Red Hare died shortly after. Historically the Red Hare Horse is only mentioned during the Battle against the Black Mountain bandits.

During the second half of 193 AD the northern warlord Yuan Shao 袁紹 initiated a series of skirmishes against the Black Mountain bandits, a loose confederation which rose to power during the Yellow Turban Rebellion in 184 AD. Following several successful skirmishes against the bandits in the Luchang Hills, Yuan Shao went west to Changshan commandery in Ji Province, the location of bandit Zhang Yan 張燕. With him he took none other than Lü Bu, his subordinate at that time. Of Lü Bu’s participation we are told the following in Records of the Three Kingdoms:

The History of the Later Han says:

Chronologically we do not read about Red Hare again. However, Lü Bu's biography in Records of the Three Kingdoms (Wei 7) and History of the Later Han (chapter 75) also contain a quote from the Cao Man zhuan 曹瞞傳, which says:

An all explaining sentence about the quality of Red Hare; who apparently was widely known as a horse superior to any other.

A Theory on the Origin of the Red Hare: The Blood-Sweating Horse[]

The Blood-Sweating Horse (hànxuè-mǎ 汗血馬), also known as Ferghana Horse (dàyuānmǎ 大宛馬), was a horse species described as “magnificent” and believed to have descended from heavenly horses. They were said to come from the Kingdom of the Dayuan 大宛 in an area located in the Ferghana valley.[4]

From Ferghana to China[]

Ever since the reign of Qin Shi Huang 秦始皇 China had been under threat of the Xiongnu 匈奴, a confederation of nomadic tribes north of China. In 202 BC, during the Former Han dynasty, Emperor Gaozu of Han 高祖漢 attacked the Xiongnu, led by Modu 冒頓, but his forces appeared to be no match for the Xiongnu. To arrange peace between the two forces Emperor Gaozu initiated the policy of heqin, which meant he married noble ladies from his royal clan to Xiongnu people.

Several successions later, it was Emperor Wu of Han 漢武帝 (reigned from 9 March 141 BC – 29 March 87 BC) who considered the peace treaty humiliating and wished to do away with it. He made plans for battle and in 133 BC he embarked on an aggressive policy of punitive force.[4]

Under the military leadership of Wei Qing 衛青 and Huo Qubing 霍去病 the Han gradually drove out the Xiongnu and achieved suzerainty in Central Asia. Shortly after it was Zhang Qing who first reported to Emperor Wu about a magnificent horse species called the “Blood-Sweating Horse”. Emperor Wu desired to obtain these horses and therefore sent envoys who, according to legend, carried with them pieces of gold and a golden horse in an attempt to persuade the Dayuan King. The persuasion, however, failed as the King was unwilling to give any animals to the Han. Underestimating an attack from the faraway Han, the King killed the envoys and took their treasures. When Emperor Wu heard of the death of his envoys he sent more than a hundred thousand soldiers under the command of Li Guangli 李広利 and the general of Ershi 貳師 and commanded them to destroy the Dayuan King and his men. They succeeded and thus Emperor Wu came in possession of the famed horses. His joy of obtaining these horses is expressed in the following poem, titled “Ode of the Heavenly Horse”:[4]

天馬徠兮 從西極
The heavenly horses have arrived from the Western frontier
經萬里兮 歸有徳
Having traveled 10,000 li, they arrive with great virtue
承靈威兮 降外國
With loyal spirit, they defeat foreign nations
渉流沙兮 四夷服
And crossing the deserts all barbarians succumb in their wake!

Up until this moment the Wusun 烏孫 people had been giving the Han horses as a tribute, but with the coming of the Blood-Sweating Horses the horses from the Wusun became known as “the western-end horses (Xījí-mǎ 西極馬),” while the name heavenly horses was now bestowed upon the Dayuan horses.[4] 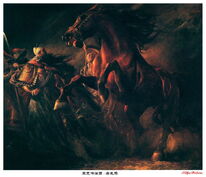 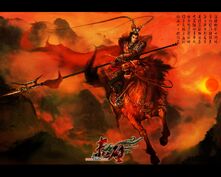 "Early in 170 Duan Jiong came in triumph to the capital, leading fifty thousand non-Chinese troops, with ten thousand captives and some of the celebrated "blood-sweating thousand-li horses" in his train. He was welcomed by the Minister Herald, and as the army reached Luoyang he was appointed a Palace Attendant, Bearer of the Mace, and then Intendant of Henan."[5]