This article is about a Yellow Turban leader, for the follower of Shu, see Zhang Bao 張苞.

Killed in battle with Huangfu Song. [3]

Zhang Bao 張寶 was the younger brother of Yellow Turban leader Zhang Jue 張角 and older brother of Zhang Liang 張梁. During the Yellow Turban Rebellion he was self-titled Lord of Earth General (dígōng jiāngjūn 地公將軍) and operated from his home commandery of Julu together with his two brothers.

The Way of Great Peace[]

Prior to the Rebellion[]

The Zhang brothers' religious movement was a success and ultimately resulted in a gathering of hundreds of thousands of followers[7] from the eight province of Qing, Xu, You, Ji, Jing, Yang, Yan and Yu. They spread the word that:

"The azure sky is dead and a Yellow Heaven will take its place. When the year is Jiazi great fortune will come to the world."

Han officials Yang Ci 禓賜 and Liu Tao 劉陶 tried to warn the Emperor Ling about the growth of the Zhang brothers' rise in popularity, but were ignored.[2]

In 184 A.D., the year jiazi 甲子, one of Zhang Jue's disciples, a man named Tang Zhou 唐周, informed the Han about his masters plot. All Yellow Turban sympathizers in the capital of Luoyang were arrested and orders were sent to Ji province that Zhang Jue and his followers should be arrested.[2]

The Yellow Turbans scored some early successes, plundering commanderies, killing Han officials and even beating Han generals. During summer the tides seem to change in the Han's favour. The Zhang brothers had lost many of their Division leaders to He Jin's generals and Zhang Jue was fighting a losing battle against the General of the Gentlemen of the Household the North Lu Zhi 盧植.[2]

During the summer Zhang Jue was taken ill and eventually succumbed to his illness. Zhang Liang therefore maintained the defence of Guangzong city in Julu commandery.

In the tenth month of 184 A.D. Zhang Liang fought the General of the Gentleman of the Household on the Left Huangfu Song 皇甫嵩 at Guangzong city and was defeated and killed after a tough battle. Thus, Zhang Bao was the last remaining of the three Zhang brothers. He led the remnants of their forces to Xiaquyang city in the north of the commandery,[1] which appears to have been the headquarters of the Zhang brothers.[4] Huangfu Song, now aided by the local Grand Administrator Guo Dian 郭典, took chase, fought them and defeated them. Zhang Bao died in the slaughter.[1]

When Dong Zhuo 董卓 was sent to replace Lu Zhi, he did not head for Guanzong city, but instead headed to Xiaquyang city, where he teamed up with the Grand Administrator of Julu commandery Guo Dian. Zhang Bao, having fortified himself and his army in Xiaquyang, were able to prevent the combined armies from gaining any success. Dong Zhuo fled and was condemned for his failure. Guo Dian, however, kept pressing the attack on Zhang Bao so that the latter did not dare to come out.[3]

When Huangfu Song defeated Zhang Liang at Guanzong, he headed north towards Xiaquyang at teamed up with Guo Dian. This time Zhang Bao was defeated. His followers were killed and Zhang Bao himself was killed in the slaughter.[3] 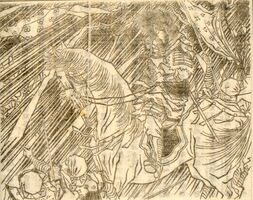 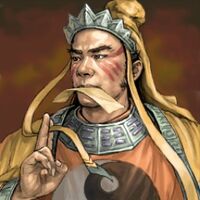 Romance of the Three Kingdoms XI 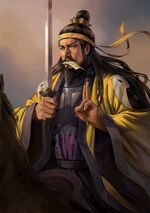 Romance of the Three Kingdoms XII