This article is too summarizing and missing important details. You can help Gongjin's Campaign Memorials by expanding it.

Zhao Yun 趙雲 was a general of Liu Bei and played a great part in the establishment of Shu-Han. Zhao Yun's early life is only vaguely described in historical sources so it is hard to give a complete biography of him.

Zhao Yun, Zilong hailed from Zhending of Changshan. Zhao Yun was originally under Gongsun Zan and when Gongsun Zan ordered Liu Bei to assist Tian Kai to fend off Yuan Shao, Zhao Yun followed along as Liu Bei’s main cavalry forces. During the time when Liu Bei was pursued by Cao Cao’s forces at Dangyang Changban, Liu Bei abandoned his wife and child to flee south. Zhao Yun carried the young child, who was Liu Shan and also protected Lady Gan, the mother of Liu Shan, hence all of them were able to escape the dangers. Zhao Yun was later appointed as YaMen JiangJun (General of the Standard). While Liu Bei entered the Shu region, Zhao Yun remained in Jingzhou.[2] He was put in charge of guarding Liu Bei's family. While he was away fighting in Shu, Lady Sun wished to return with Liu Shan back to Wu, but Zhao Yun and Zhang Fei stopped her. When Zhuge Liang sent reinforcements to Liu Bei, Zhao Yun's detachment conquered up to Jiangyang and rejoined Zhuge Liang and the others in the siege of Chengdu. Zhao Yun also participated in Liu Bei's Hanzhong campaign during his battle against Cao Cao. In 221 he opposed Liu Bei's invasion of Wu, but was not listened. During Zhuge Liang's first Northern Campaign in 227, Zhao Yun fought Cao Zhen at Jigu. Even though he was defeated, he organized the rear and lead an orderly retreat, preventing further casualties. He died in 229 and was later enfeoffed as a Marquis. 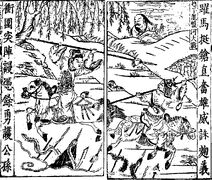